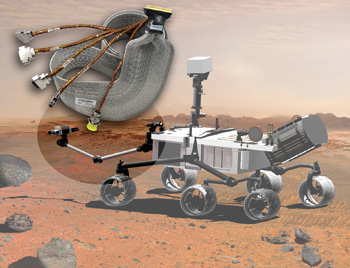 Cicoil High-Flex Cables are allowing NASA to perform critical, extreme environment robotic tests, in preparation for the Mars Exploration Program. Mars Science Laboratory (MSL), scheduled to launch in 2011, is part of NASA's Mars Exploration Program, a long-term robotic exploration of the red planet. Mars Science Laboratory is a rover that will assess whether Mars' environment can support, or has supported, microbial life. In other words, its mission is to determine the planet's "habitability." Essential to the mission is the MSL's Robot Arm that holds and maneuvers the instruments that help scientists get up-close and personal with Martian rocks and soil. Running the arm is a custom-formed Cicoil cable assembly conducting power, signals and video from the instruments to the main electronics within the rover's body. Cicoil's six-inch wide custom flat cable is now in rigorous testing at NASA's Jet Propulsion Laboratory (JPL) in Pasadena, CA.

The Robot Arm holds and maneuvers the instruments that help scientists get up-close and personal with Martian rocks and soil. Cicoil's unique cable carries shielded power, signal, and high performance video signals, in the continuously flexing robotic arm. Custom contour forming of the cable assembly allows JPL engineers to fit the cabling along the actual shape of the robotic arm, providing a clean design, without cables interfering with the extreme flexibility of the robotic testing. Because Cicoil cables are designed to last tens of millions of continuous flexing cycles, they will withstand the rigors of the extreme testing being performed on the MSL Robot Arm.

In addition to fit and flexing issues, the Robot Arm is undergoing extreme environmental testing, including high heat, freezing cold, sand, salt, fog, and water. One of the key tests is to test while being exposed to blowing, red 'Mars Sand,' which is an-extremely fine, abrasive sand found on the surface of Mars. Cicoil's silicone cables are designed to operate in this type of extreme environment, which is critical to the successful testing of the new Mars Science Laboratory.

Cicoil utilizes a process of encapsulating conductors in silicone that renders them unaffected by severe vibration, G-Forces, shaking motion, extreme temperatures, water, shock and the rigors of supersonic flight. Cicoil's specialized silicone jacket functions as a shock absorbing material, completely surrounding and supporting each individual component. Cicoil cable does not require a clamping system (which is typically utilized with PVC, Polyurethane and Teflon jacketed cables) because the conductors cannot creep out of the silicone encasing them.

Cicoil's quality system is certified to ISO 9001, including the Aerospace AS9100 standard, cable assembly technicians are certified to IPC J-STD-001, and IPC-620, for cable soldering and crimping. 100% of Cicoil cables are electrically inspected for all point-to-point and electrical values, ensuring that each and every cable assembly meets 100% of the quality standards required by the most critical application.

Cicoil has been the leader in designing and manufacturing high performance cable assemblies for over fifty years. The company's unique silicone coated flat cables provide high flexibility, extremely long life, and they can withstand temperature extremes from -65 degrees to +260 degrees Celsius. Cicoil's cables are used in thousands of demanding applications, including commercial aircraft, military jet fighters, semiconductor equipment, and the Space Shuttle. Cicoil designs and manufactures its cable and cable assemblies in an automated facility in Valencia, California. Cicoil's quality assurance system is certified to the ISO 9001 (AS9100) standard. Visit www.cicoil.com for more information, or call 661-295-1295 to speak to an application engineer.