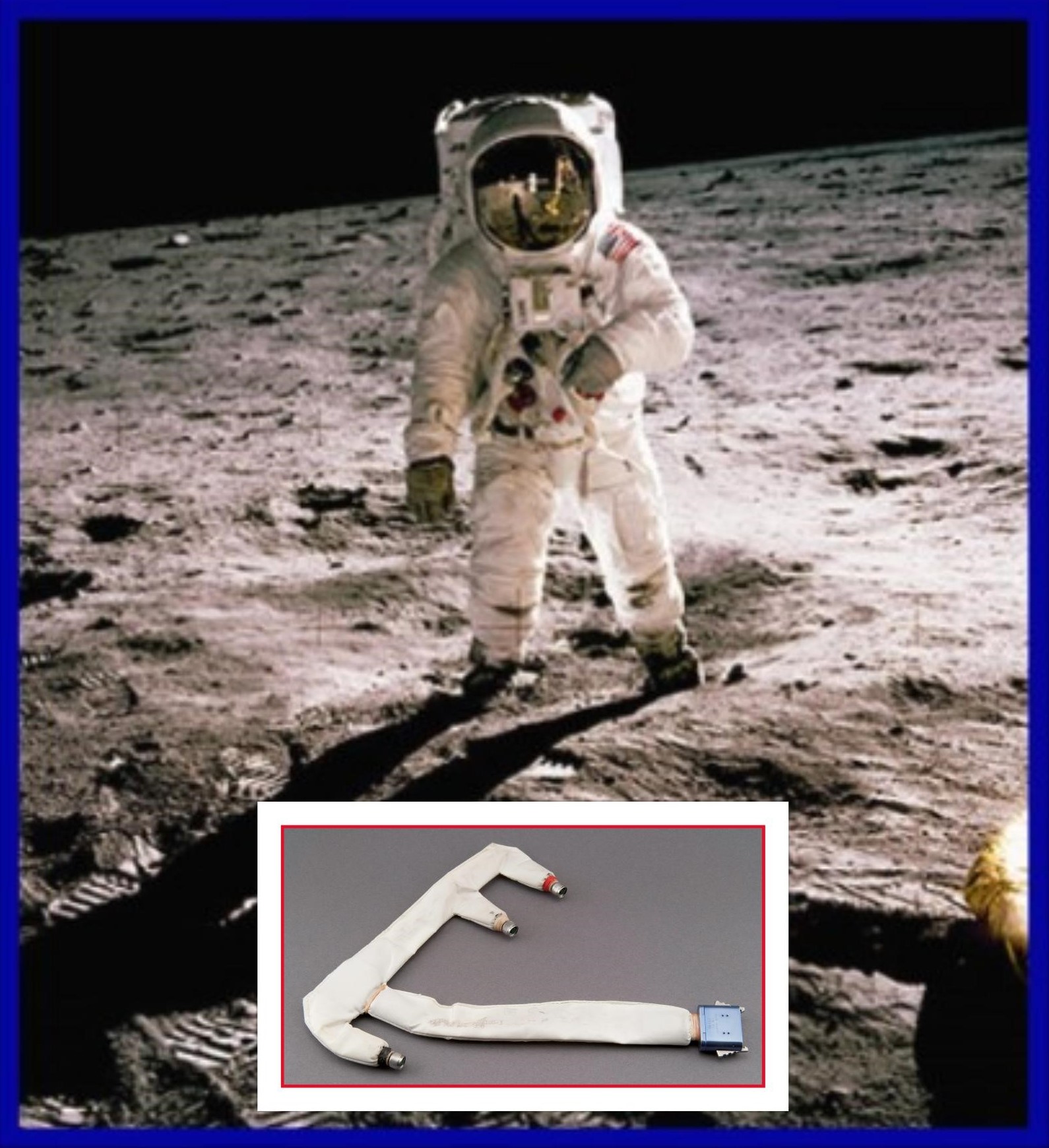 On that infamous July 20 day in 1969, the Cicoil Bio-Medical harnesses made history by being an integral part of the Historic Apollo 11 First Moon Landing.  The Intravehicular Harnesses were worn by Apollo 11 Astronauts Neil Armstrong, Buzz Aldrin and Michael Collins on board the Columbia Command Module during the Lunar orbit and the “Eagle” Lunar Module that landed on the Moon's Surface.

The Cicoil Extravehicular Bio-Medical Harness was worn by Apollo 11 Commander Neil Armstrong as he took his historic “First Small Step for Man, and One Giant Leap for Mankind”, and was also worn by Eagle Lunar Module Pilot Buzz Aldrin as he took the infamous “2nd Walk”.

The Cicoil assembly successfully enabled continuous monitoring of all vital signs for each Apollo 11 Astronaut during flight, orbit, Moon Walk operations and reentry back to Earth.  The flawless operational performance of Cicoil’s Bio-medical Instrumentation and Telemetry Harness designs were, in NASA’s words, “Vital to the successful achievement” of these history-making flights.

Cicoil’s 26 inch long, zero gravity “Bio-Harnesses” were worn underneath the Intra-Vehicular Constant Wear Garments for all 3 Astronauts while inside the Apollo 11 Spacecraft, and under the extra-vehicular (EV) pressure suit during the Moonwalk activities of Astronauts Armstrong and Aldrin. The Cicoil assembly enabled continuous monitoring of the vital signs, such as blood pressure, respiration, body temperature and pulse rate for each astronaut during flight, orbit, spacewalk and the “First Step” Moon Landing operations.

Cicoil’s Biomedical Harness was the only tested harness design which met IVA (Intravehicular Activity) and EVA (Extravehicular Activity) needs during all phases of the Apollo Space Mission.  The flawless operational performance of Cicoil’s Bio-Harness designs were, in NASA’s words, “Vital to the successful achievement” of these history-making flights.

Cicoil President & CEO Howard Lind stated: “Cicoil is very proud to have played such a pivotal role in history, as the supplier of the mission-critical biomedical harness worn for the Moon Landing in 1969.  It’s very special to everyone at Cicoil that NASA selected our flat cables 50 years ago, but even more special to have been part of Neil Armstrong’s famous ‘First Step for Man, and Giant Leap for Mankind.”

In addition to every Apollo Space Flight, Cicoil has manufactured Space Flight Approved cable assemblies for the Mercury and Gemini Space missions, Skylab, Mercury Voyager, The Space Shuttle; and today are utilized on Space Transport Rockets, Probes, Satellites and The International Space Station.

For an Out of This World Experience, be sure to check out the Cicoil Bio-Harnesses worn on the Apollo 7, 8, 9, 11, 12, 14, 15 and 17 missions at the Smithsonian Museum in Washington DC. http://collections.si.edu/search/results.htm?q=cicoil&sType=%22phrase%22

If you would like to learn how Cicoil developed the First IDC Ribbon Cable, helped put a Man on the Moon, and find out more about our Innovative Flat Cable Technology, please contact our office at 661-295-1295 to discuss your application or to set up an on-site visit to your location.

Cicoil has been a leader in designing and manufacturing high performance cable assemblies for over sixty years. The company's Patented Flexx-Sil™ Flat Cable Technology provides high flexibility, extremely long life, and they can withstand temperature extremes from -65 degrees to +260 degrees Celsius. Cicoil's flat cables are used in thousands of demanding applications; including aircraft fuel control cells, semiconductor automation, and the International Space Station. Cicoil designs and manufactures its Flexx-Sil™ jacketed cables and cable assemblies in an automated facility in Valencia, California. Cicoil's quality assurance system is certified to the ISO 9001 (AS9100) standard. Visit www.cicoil.com for more information, or call 661-295-1295 to speak to an application engineer.